Who Am I, What is My Name? Part III – Gertrude and Sonia Spyra

Who Am I, What is My Name? Part III – Gertrude and Sonia Spyra 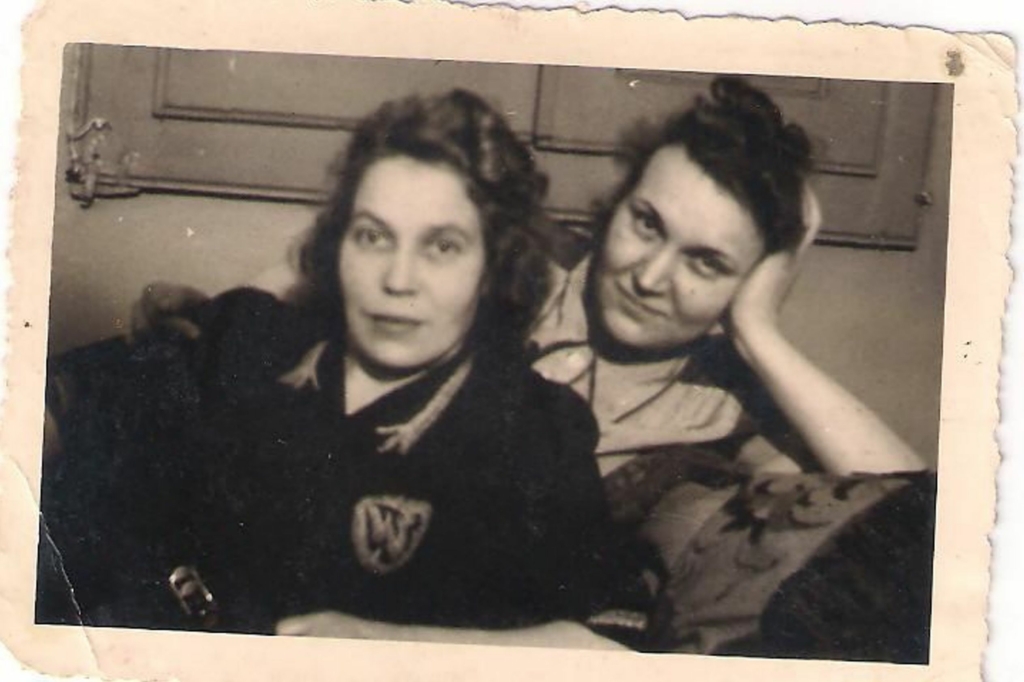 A mystery within the mystery of Pnina’s identity is the fate of Gertrude Spyra and her daughter Sonia. As the parties responsible for smuggling Pnina from the Warsaw Ghetto, Gertrude and Sonia may have left behind clues about Pnina’s parents. Perhaps the Spyras wrote letters to their family members, as did their friend Charlotte Rebhun. Perhaps a co-worker overheard something they said about how they saved a baby during the last days before the Ghetto Uprising.

According to “the story”, Pnina’s parents approached a German soldier about smuggling their daughter out of the Warsaw Ghetto in late 1942-early 1943.  The soldier was the sweetheart of Sonia Spyra, Gertrude’s daughter.  The story relates that Gertrude was already hiding Jews, and that she did not have the resources to help anyone else, so she asked her friend Charlotte Rebun if she could take the baby in as her own.  Gertrude and Charlotte were Christian women who had been married to Jewish husbands. Both couples had been deported to Warsaw, the Rebhuns from Berlin, and the Spyras presumably from somewhere in Germany. Both husbands were arrested or “disappeared” in the early 1940s.  Charlotte agreed to take in the child, and sometime later Pnina was delivered to her apartment in a white baby carriage with a note indicating her name was Barbara Wenglinski.

Over the last year, we have discovered much about Gertrude Spyra and Pnina’s parents that has answered some questions. But so many others have been raised. 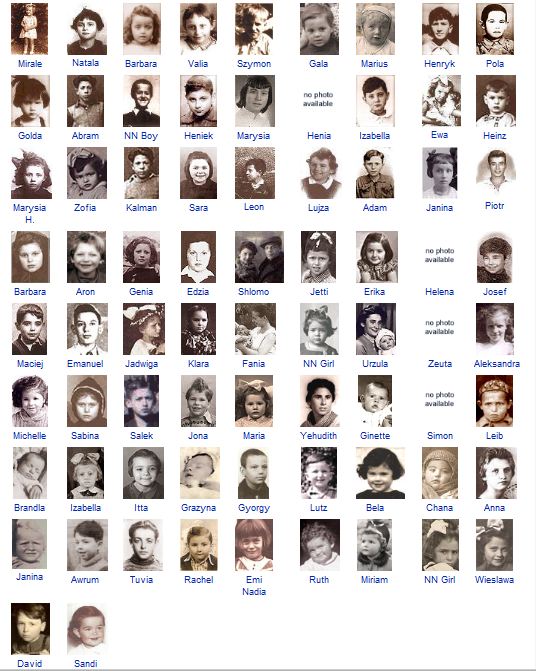 Our team of researchers now includes Pnina Gutman, Eva Floresheim, owner of the www.missing-identity.net website, myself, and two new members:

Cate Bloomquist – Forensic genealogist, colleague, and friend whom I have known through my Forensic Genealogy website and Facebook page, and Hania Allen – Researcher and friend of Polish background living in Scotland. After the war, Hania’s parents immigrated to Scotland, where she was born.  I became friends with Hania when I helped her find long lost cousins George and Betty, whose family had gone to America before the War.

*****
Our much-needed breakthrough came when Cate discovered Gertrude and Sonia Preiss- Spiro on a transport from Pawiak Prison in Warsaw to Auschwitz on 24 August 1943.  This was just a few months after the Ghetto had been destroyed during the Uprising in April and May of that year.  Approximately 100,000 men and 200,000 women passed through the prison, mostly members of the Armia Krajowa (the Polish resistance movement), political prisoners, and civilians taken as hostages in street round-ups.  An estimated 37,000 were executed and 60,000 sent to German death and concentration camps. 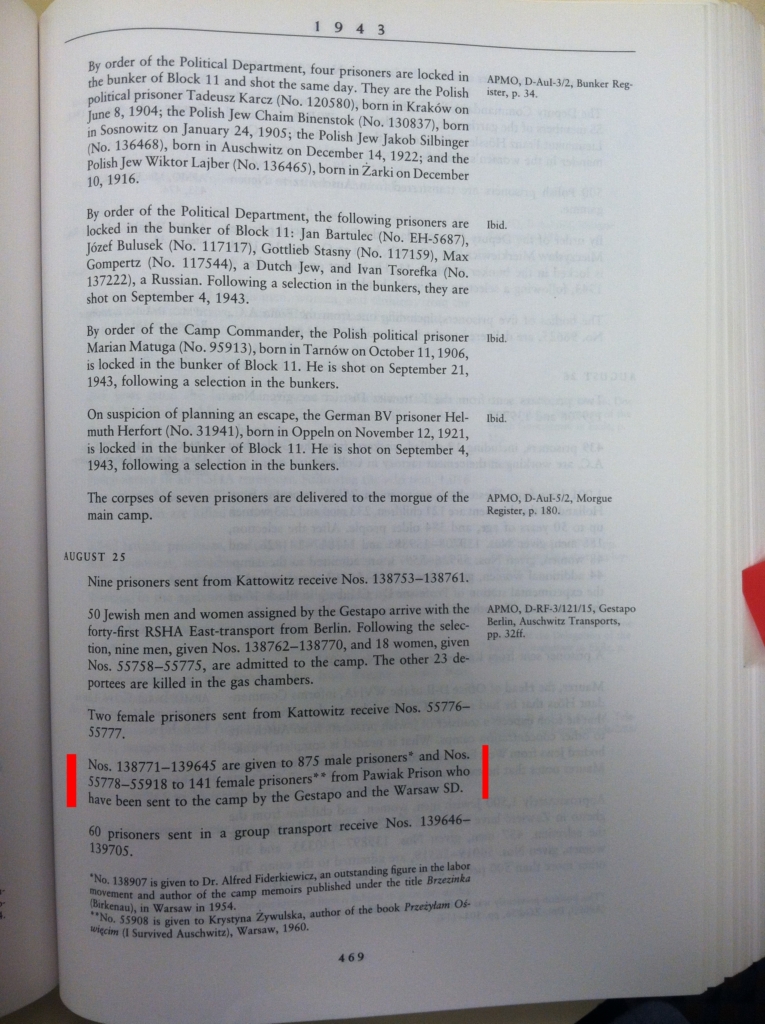 In Danuta Czech’s Auschwitz Chronicles, there is a mention of the transport arriving at Auschwitz the next day, 25-8-1943.  There is no mention of prisoners dying during transport, or a selection upon arrival, giving us hope that Gertrude and Sonia arrived alive and may have survived, at least for a while.

Gertrude’s name was recorded as both Piss-Spiro and Preiss-Spiro.  We have concluded that the name was probably Preiss-Spiro, with Preiss being the German part of her name, and Spiro being the Jewish part. There is still a question about why her name was hyphenated and which name was her married name and which was her maiden name.

Cate’s initial discovery led us to many others that have allowed us to fill in more of the story of Gertrude Preiss-Spiro. The General Government Telephone Directories for Poland from 1941 and 1942 list Gertrude Spiro, Verk. v. Spirit. und Zigaretten (liquor and cigarette saleswoman), with her shop located at 2 Nowinarska St.,  and her residence in 1942 listed as 48 Tamka St, Warsaw.  This is the address that Pnina remembers for “her” Gertrude Spiro.

Researching other Polish directories has led us to further revelations.  In the 1938 Polish Companies, Industry, and Trade, Cate discovered a Gertruda Spyra who was a partner in Poniecki, Meisner & Co., a wine and spirits manufacturing company in Chorzów near Katowice in southeast Poland.  This must certainly be the same Gertrud, as the chances are slim that there were two different women with the same name (although with different spellings), who were both in wine and liquor sales. 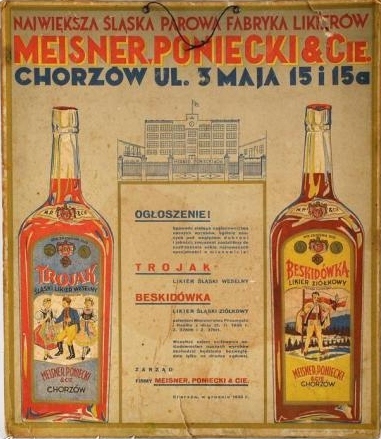 A further clue is provided by the 1934 and 1936 directories, where the partner in the Poniecki company is listed as Dr. Jan Spyra, also listed as a medical doctor residing at 4th of May St. No. 3.  The change in the name of the town from Krolewska Huta in 1934 to Chorzów in 1936 occurred as a result of one of several political reorganizations of the area between the early 1920s and the mid-1940s.

Following several uprisings, the eastern part of Silesia, including Chorzów and Królewska Huta, was separated from Germany and awarded to Poland in 1922. In 1934 the industrial communities of Chorzów, Królewska Huta and Nowe Hajduki were merged into one municipality with 81,000 inhabitants. The name of the oldest settlement Chorzów  was given to the whole city.  On the day of the outbreak of World War II in September 1939, Chorzów was annexed by Nazi Germany and promptly re-incorporated into German Silesia.  At the end of World War II, Chorzów, along with the rest of Silesia, was re-incorporated into Poland.

The change in hands of Chorzów between Poland and Germany could account for much more than the change in name of the town. It could also explain why the Rebhuns referred to Gertrude as German, and why she apparently left Chorzów for Warsaw in 1939-1940. Beginning in October 1939, as part of their “Germanization” plan, the SS began to expel Poles and Jews from the Polish Corridor (including Chorzów).  If Gertrude’s husband was Jewish, he may have been deported to Warsaw, which was a part of the General Government district, and she would have undoubtedly accompanied him. Although he was apparently taken away or disappeared not too long after they arrived there, Gertrude may have been allowed to remain and to live on the Aryan side of town because of her German heritage.

So who was Dr. Jan Spyra? 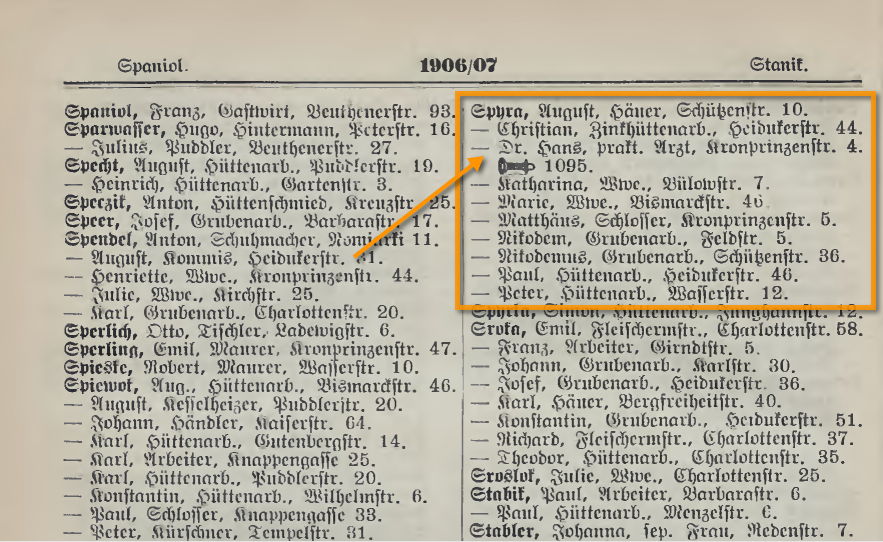 According to the Polish medical directories from the 1920s and 1930s, Jan Spyra was a medical doctor born in 1869, who received his medical degree in 1896. He appeared in the city directories as early as 1906, when he was listed as Hans Spyra, the town was known as Königshütte, and 4th May St. was called Kronprinzen St.:

Gertrude is subsequently listed in the 1938 Polish Directory (excluding Warsaw) as Gertrude Spirowa, wdowa po lekarzu, (widow of a doctor), Mikolow, Jamny 13.  Note the name Spirowa is a variation on the name Spiro that indicates a widow. 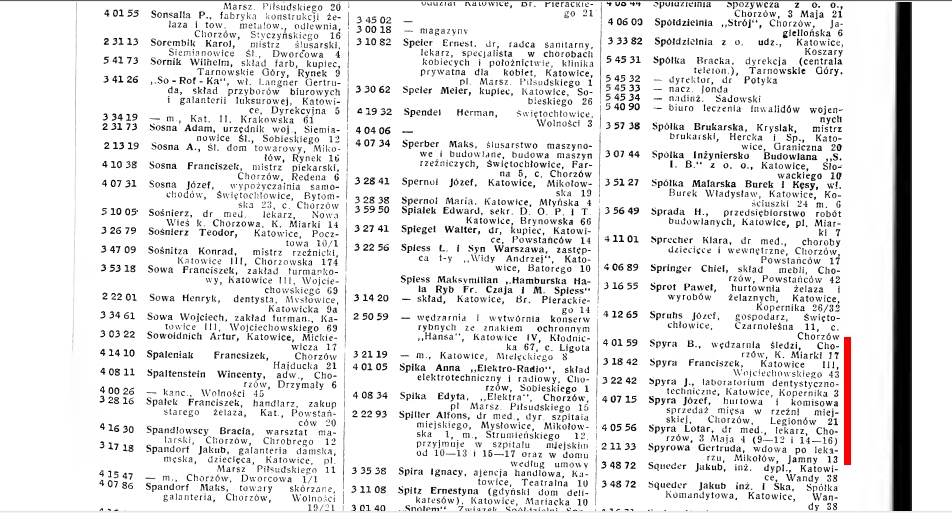 Dr. Jan’s death in 1935 explains why his widow Gertruda assumed his position as a partner in the liquor company in late 1935-early 1936.  If she is “our” Gertrude Spiro, she married a man who was much older than she was, who died before she left for Warsaw in about 1940.  Other possibilities are that the Gertrude listed with the liquor company was the mother or the mother-in-law of the Gertrude who had the liquor and tobacco shop in Warsaw.  It is hard to believe that there could be two unrelated Gertrude Spyras in the liquor business at the same time.

The directories also provide information on other members of the Spyra family. Herman Lotar Spyra first appears in the 1936 Polish Medical Yearbook listed twice – once in Myslowice (another name for Mikolow) near Katowice, and a second time with an office at the address on 4th May St. in Chorzów  He was born in 1905, and received his medical degree in 1932: 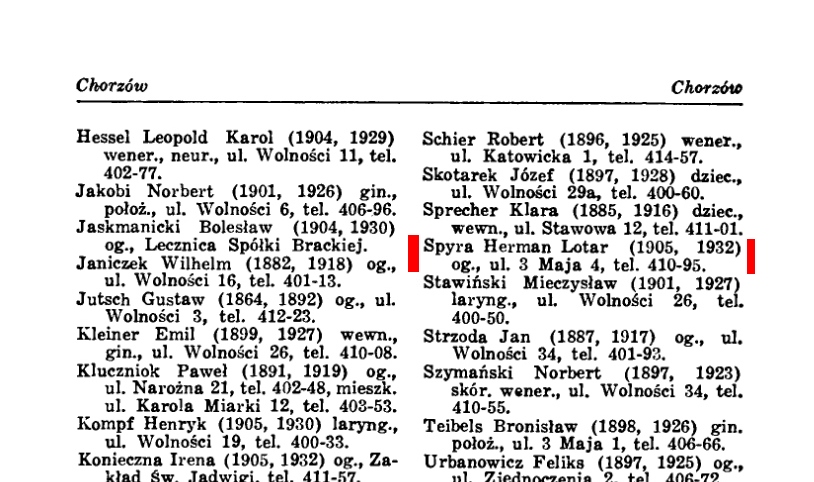 Note that the last four digits of Herman Lotar’s telephone number are the same as Dr. Jan’s.  Undoubtedly, he worked as his father’s assistant until his father died in 1935, at which time he took over his practice.

We have not been able to link these two Jans to Gertrude’s family, although we believe they may be related.

*****
While we are researching the fate of Gertrude and her daughter Sonia after they arrived at Auschwitz, we have discovered what happened to Herman Lotar Spyra, giving us hope that we will be able to locate surviving Spyra family members.

After the war, Lotar moved to the UK, where he married Maria Focjik in late 1946 in Romsey, Hampshire, England. They had a daughter Gloria, born in mid-1947.

Three months later, the family were listed on the passenger manifest for the ship Empire Bure, sailing from Liverpool to Tobago, with an ultimate destination of British Guyana.  There were quite a few Polish refugees on board the vessel who were sent out by the British War Office, but the Spyras seem to have been traveling separately from the group.  It is doubtful that they traveled on the ship, since their names are struck through and they appear two weeks later on November 15, 1947, on the passenger manifest for the Almanzora, traveling from Southampton to Bermuda via Jamaica and Trinidad.   Their ultimate destination was again listed as British Guyana.

Whether the family arrived in British Guyana or whether they disembarked in Tobago and sailed for another destination is not known.  They do not appear in the passenger arrivals for New York.  The last known record of Lotar, Maria, and Gloria is a US Department of Justice notice stating that the family was detained and deported from the US on 2 January 1951. They departed from New York on Pan American Flight 2o5 bound for Georgetown, British Guyana via Puerto Rico.

We have contacted the Guyana Archives in Georgetown, hoping there may be records of what happened to the Spyra family. Perhaps Gloria is still alive and she can relate to us what she was told about her aunt(?) Gertrud Spyra.  Perhaps she has letters that she has kept for decades as a remembrance of her family who were killed in the war. I’ve also written posts on the Guyana Then and Now blog that is popular among English-speaking people who grew up there, and who might remember a middle-aged Polish doctor with his young Polish wife and daughter.  Perhaps someone on the blog went to school with little Gloria.  But so far, no one has responded to my queries and nothing more is known about the whereabouts of Dr. Lotar Spyra and his family.

*****
Perhaps the most important clue to how Pnina was smuggled from the Ghetto is quietly hidden in all the facts we have unearthed in our pursuit of the fate of Gertrude Spyra.

There is a significance of alcohol and tobacco in war time.  They are the primary currency of the Black Market.

Our search for the fate of Gertrude Spyra and her daughter Sonia has led us from Warsaw to Chorzów, to the UK, to New York, and finally to British Guyana via San Juan, Puerto Rico.  We must now return to where we started in the Warsaw Ghetto.

Part II:  Who Am I? What is My Name? Pnina, Wolfgang, and the Warsaw Ghetto

Part III: Who Am I, What is My Name? Gertrude and Sonia Spyra

Part V:  Who Am I? What is My Name?  Gertrude and Sonia’s Escape

Part VI:  Who Am I? What is My Name? Our Search for Gertrude Spiro

Part VIII:  Who Am I?  What is My Name?  Gertrud and Leo’s Trial