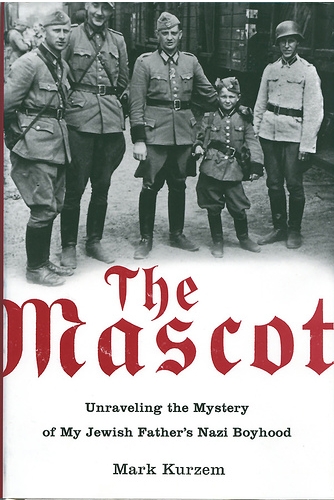 Keith Moor, Insight Editor at the Herald Sun newspaper in Melbourne, Victoria recently published an article on The Mascot, the international bestselling biography of Holocaust survivor Alex Kurzem.
To read the article in pdf format, click here.
As Keith mentions, the foundation of the story is undeniably true.  Alex was adopted by the 18th Kurzeme Latvian Police Battalion in July 1942 as a child in the forest around Minsk. Yet my colleague, college professor Dr. Barry Resnick and I have uncovered much that lends doubts to his claims that he was a Jewish boy who survived the Nazi massacre of his family six months earlier; a massacre that in some version of the story was performed by members of the same battalion who adopted him.
Our research over the past two years has spanned Belarus, Latvia, Israel, the United Kingdom, Australia, Germany, France, Hong Kong, Taiwan, and the United States.  After having interviewed dozens of people who both support Alex and who express disbelief at his story, and after having reviewed countless documents relevant to the story, we have found no proof to support Alex’s claims.
There are, however, four key pieces of evidence that could confirm Alex’s story. Unfortunately, they are being withheld by Alex himself:

Alex Kurzem and Erik Galperin who claim they are half-brothers.

1.     A Y-DNA test to compare Alex to Erik Galperin, to support Alex’s identification as Ilya Galperin, Erik’s half-brother.  Without a DNA confirmation that Alex is the son of Solomon Galperin, there is nothing to link him to the Galperin family murdered in Koidanov on October 21, 1941.
Alex has stated he would take such a test only if paid $100,000.
2.    A doctor’s certificate stating that he has been circumcised, supporting his statements that he feared for his life, lest his Jewishness be discovered by unsuspecting members of the Latvian battalion.
Alex has stated he would undergo a medical examination only if paid $50,000.
3.    A copy of his application to the Jewish Claims Conference for which he was required to provide a detailed narrative of his life during the Holocaust.  The Conference accepted his application and has been sending him monthly Article 2 reparations for the last dozen years or so. The Jewish Claims Conference will not release his application without his permission.
Alex has refused its release.
4.    Copies of two video testimonies Alex gave for the Holocaust Center in Melbourne in the late 1990s, recounting his Holocaust experiences before the release of The Mascot documentary and the publication of the book versions of the story.
Alex has refused its release.
Although Alex gives media interviews and lectures to school children about the Holocaust, he has placed an embargo on his testimonies, prohibiting anyone from viewing them in his lifetime without his permission.  What did he say on the videos that he has not already publicly revealed?
Alex Kurzem is the subject of an award-winning documentary that was turned into an international bestselling book, and that is now being produced as a $120M film starting either Sir Anthony Hopkins or Robin Williams as Alex in middle-age.  There is unquestionably millions of dollars exchanging hands in the success promotion of Alex’s story.  Yet as one of the most visible Holocaust survivors in the world, Alex refuses to provide evidence that his story is true.
When approached by people who believe Alex’s claims, we have freely shared our research materials, only to be met with unsupported opinions, work-arounds, and explain-aways about how the materials could not be used to disprove it.
Yet when we have asked these same people to provide documentation confirming the story, we have invariably been denied access.  These include Alex, his publisher Penguin, his literary agent Sterling Literalistic, and Hubert Caillard, the attorney representing the person who bought the movie rights.  The reasons vary.  We have been told “the documents are in the mail” or “I will send them to you when I get back from my trip” or “I don’t have to prove anything” or “I’ll think about it”. No matter.  Nothing has been forthcoming.
Personally, I have no bias for or against Alex’s claims.  I would be delighted if the controversy was indisputably resolved in his favor.  Yet as our research has progressed, we have found ourselves standing between two communities.  One is a community of doubters who have freely offered us whatever they have.  The other is a community of supporters who have refused access to whatever they could provide.
What are we to make of that?
By Austin Bethell|2011-05-29T19:09:00-07:00May 29th, 2011|
Page load link
Go to Top